I have seen a few blogs that mention the plight this animal is in, but with less life history than I'll provide you with. 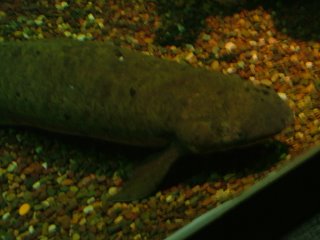 Yeah, it's kinda blurry. Aquaria are not good places for snapshots.

The Queensland (or Australian) lungfish, Neoceratodus forsteri, is a fish with, as its name suggests, a lung (living in Queensland, Australia is secondary). This is to help it manage when levels of dissolved oxygen in the water are low, which is likely to happen in the slow-moving pools that it inhabits. It is completely aquatic, in contrast to African or South American lungfish (with two lungs) that spend entire dry periods burrowed in a mucous cocoon with an airhole to the surface. However, N. forsteri can spend hours out of water if it's kept moist, according to this study.

Appropriately described as "a living fossil," lungfish certainly look the part. They can grow up to three or four feet in length, and have large, platelike scales and fins that look ready to attempt to flop onto land. In Australia, lungfish fossils dating back 100 million years (when our mammal ancestors were running from Compsognathus) have been found, and there are minimal differences. The Queensland lungfish, even moreso than the other lobe-finned fish, helps give an idea of how the water-land transition happened in vertebrates about 370 million years ago1.

Alright, so it's not endangered, it's threatened. They are very long lived, which, in population terms, means slow to reproduce. The majority of problems facing the lungfish are actually facing the eggs.Invasive tilapia prey on the young and eggs. Also,dams on the rivers in which they live flood out the vegetation in which they breed. I've seen links to this petition, but I'm trying to be more of an educator than activist (and I linked to it anyway).

There doesn't seem to be any official Queensland lungfish breeding programs in existence. There are, however these guys, from whom you can buy a baby lungfish for just $850! Don't forget to buy the 6 foot tank. They are CITES approved, whose job is to check up on the trade of threatened and endangered species. Breeding for pets is not the way to save animals in the wild, so programs on releasing lungfish and saving habitat are the way to go. Kids! Just be sure to ask your parents nicely for a lungfish. And say please and thank you.

1As a somewhat random aside, I want to point out that flies are never described "living fossils," even though they were in their modern form a good 100 million years before the lungfish.
Posted by Garfman at 10:14 AM
Categories: Fish, Freshwater, Human Disturbance, Invasive Species

'*As a somewhat random aside, I want to point out that flies are never described "living fossils," even though they were in their modern form a good 100 million years before the lungfish.'

AND were on land long before the vertebrates.

That is a cool fish, it is a shame that so many species are now in danger of extinction.