Black and White and Red All Over

This marks the 100th post on this blog. To celebrate, I intend to do something a little different from what I’ve done in the past. For this month’s species, I’ll be writing about an animal widely considered to be one of the cutest around. It has become China’s golden child and the face of the World Wildlife fund. I am, of course, talking about the Giant Panda (Ailuropoda melanoleuca). While previously thought to be halfway between bears and raccoons, recent evidence puts them squarely in the bear family. Keep that in mind as you read this, as there is a depth to these animals that isn’t widely publicized. 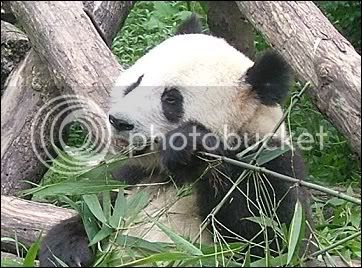 The idea that Pandas eat only bamboo isn’t too far from the truth, as it makes up the large majority of their diet1. However, they are not above enjoying carrion if they happen to come across it. This is beautifully illustrated in this ARKive video, where a Panda saunters up to a rotting deer carcass, rips off a leg, and sits back to enjoy his meal. There are even reports of a wild Panda killing sheep, though it didn’t eat any of them.

Carnivory is one thing, but surely aggression isn’t a trait of these cute fuzzy-wuzzys, right? I’m sure that’s what went through mind of the drunk man who jumped into a zoo enclosure to give Gu Gu the Panda a hug, right before Gu Gu bit his legs. Or the teenager that scared Gu Gu into biting his legs. Or the man who jumped into Gu Gu’s enclosure to retrieve his 5-year old’s toy. Guess what happened to him. “Not so Cute” or “Not too Cuddly” seems to be the response of reporters on incidents like these. How surprised would we be if these had occurred with a Grizzly Bear? This is just an increasingly frustrated animal trying to defend its territory. The story is likely the same for the Panda in this video, attacking a man sitting outside its enclosure.

While it may seem like I’m trying to vilify the Panda, it's only to prove a point. I’ve got nothing against scavengers, or even dangerous animals. But the Giant Panda just dropped a few levels in the cuteness scale in the last two paragraphs, didn’t it? I’ve got all sorts of tidbits that could make any Charismatic Megafauna seem less charismatic2. Putting an animal on a pedestal just makes it that much easier to knock off, and turning an animal into a symbol makes you forget that it’s an animal. All creatures have behaviors that humans aren’t fond of, but we can’t expect them to act like giant teddy bears. While conservation efforts have helped the Giant Panda in the wild, over-exposure of the “cute” version of their life has left more and more people bored by its plight. The solution, as I see it, is to spread the exposure around to any other species that could use the help. Which is where I come in, I suppose. I hope I’ve managed to achieve that since I started this blog.

I really want to thank all of my readers who have stuck with me through these one hundred posts. I also have to thank my fiancée and my parents, who have helped with editing and ideas, but far more importantly have completely and utterly supported this fool idea of mine for four years. Thank you.

1 All bears are omnivorous, but the meat to veggie ratio depends mostly on the availability of the food.
2For example, Gorillas and Lions will commonly kill the young of competing males. Chimpanzees and Dolphins commit murder of their own species. Black Rhinoceroses have the highest rates of death from fighting each other than any other animal. I could go on.
Posted by Garfman at 10:28 PM 6 comments:
Categories: Habitat Fragmentation, Habitat Loss, Mammals, Tropical Forests
Newer Posts Older Posts Home
Subscribe to: Posts (Atom)